There is a direct correlation between obesity and heart disease.

Which is not to say that obesity causes heart disease.

The truth is the factors that lead to obesity are the factors that add to the risk of heart disease. A person approaching obesity is also leading themselves down the path to future heart events.

Let’s look at the two conditions and see how they relate. Perhaps we can understand that avoiding obesity can help prevent future heart disease. Any questions that come up can be directed to us as Healthy Potentials.

The Centers for Disease Control and Prevention (CDC) defines obesity as occurring in those people who have a body mass index of 30 or higher. Body mass index is calculated by dividing a person’s weight by their height squared.

Obesity is a disease, and as such, often exists due to no fault of the person afflicted. Very often, obesity is an inherited trait. It can come about due to environmental factors. It is often the result of poor diet, little or no physical activity, or work-related physical conditions. As such, obesity can be affected by increased exercise or a change of diet. But that is not always the case.

Obesity brings with it a host of other diseases or health issues, including heart disease. Other possible afflictions due to obesity include high blood pressure and diabetes.

There is a correlation between obesity and heart disease, but obesity does not cause heart disease in and of itself. It is the factors that lead to obesity which often lead to heart problems; the influence of poor diet and lack of physical activity can cause both obesity and poor heart health.

The CDC regularly provides statistics on BMI across the United States, indicating which areas of the country have the most people who would be considered obese based on statistical analysis.

Below is a very recent map provided by the CDC showing the prevalence of obesity state-by-state throughout the United States: Prevalence† of self-reported obesity among U.S. Adults by state and territory, brfss, 2020

The states with reddish hues have the highest rate of obesity among U.S. adults. The overall redness of the map indicates that obesity is a huge problem in the country.

Now look at a map of critical heart events within the U.S. 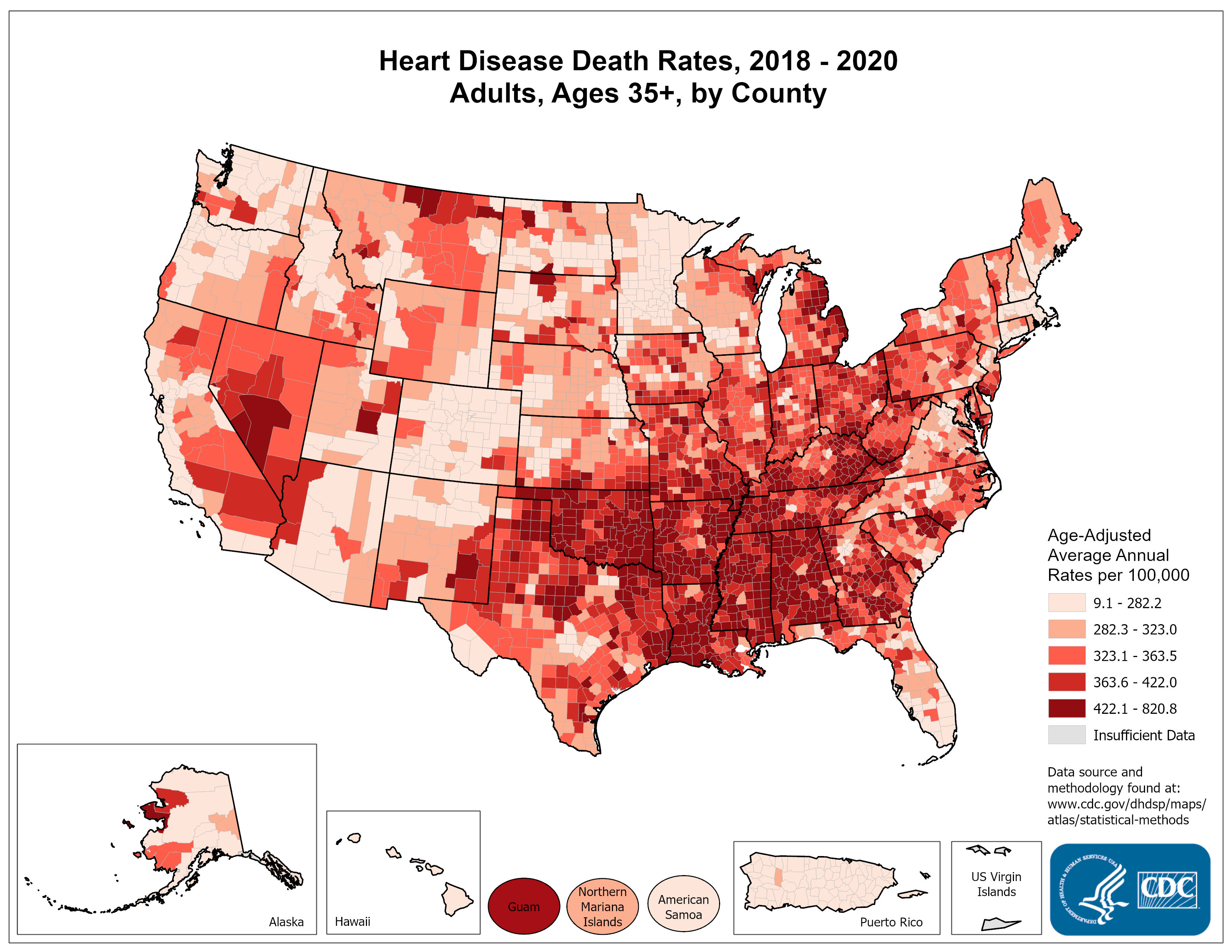 Heart disease death rates for 2017 through 2019 for adults aged 35 years and older by county.

The reddish hues showing the highest rate of heart disease deaths are in virtually the same locations as on the obesity rate map shown above. This is the definition of correlation.

Anyone suffering from obesity has been warned about the impact their body fat content has on the heart. But, sometimes it takes a visual aid to prove to the affected just how strong the correlation is between obesity and heart disease.

But, we must restate that obesity is not the cause of heart disease. They are two results from the same lifestyles. And they can both be reduced simultaneously.

Any act of physical activity beyond your normal behavior can reduce your body fat content and have a healthy benefit upon your heart. Any change in your diet that reduces your body fat has the exact same effect on both your obesity and your heart health.